The Shangri-La Nose Art T-Shirt is high quality and silk screened with WWII nose art images. Painted by the late John Schumick, a renowned nose artist during WWII. Our Memphis Belle Nose Art T Shirt is silk-screened and reproduced from original artwork painted on leather by Mr. Schumick and presented to Sgt. David Hack (CEO of US Wings). His original artwork is still hanging in the retail store and offices at US Wings (artwork is not for sale).

The “Shangri-La” was a P-51 mustang that was flown by Don S. Gentile. On April 8, 1944, he surpassed Eddie Rickenbacker to become the “Ace of Aces”, the highest scoring fighter pilot in American history. Dubbed “Captain Courageous” by President Franklin D. Roosevelt. Winston Churchill referred to him as his wing-man. He was known to give up weekend passes so that he would be available to fly. On one mission he defeated German Ace, Kurt Von Meyer, who had 150 allied kills to his credit. He finished his WWII flying career at 23 with over 350 combat hours, 182 sorties, and over 27 victories to his name.

Although Nose Art originated with Italian & German pilots during WW I, true nose art appeared during WW II. Nose art paintings were done by professional civilian artists as well as highly talented amateur servicemen. Bomber crews which suffered high casualty rates during WWII developed a strong bond with their aircraft & adorned them with nose art believing that brought good luck to their planes. Many pilots and flight crew members adorned their A2 leather flight jackets and B3 leather flight jackets with duplicated copies of their aircraft nose art. 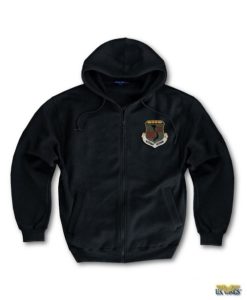 US Wings Kids US Flag T-Shirt